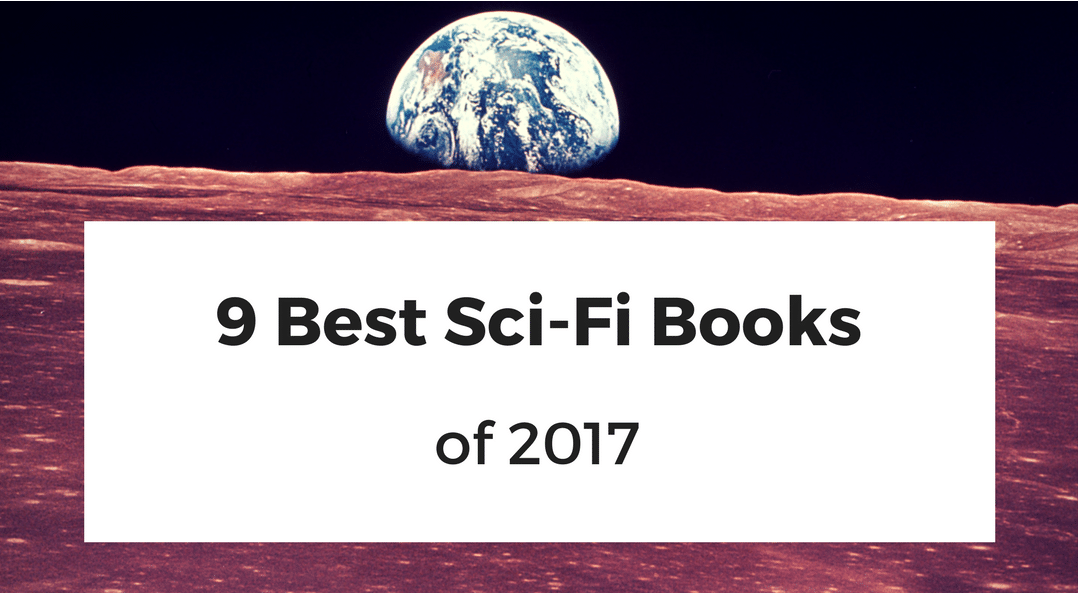 The 9 Best Science Fiction Books of 2017

I've got some great books for you that you might've missed in 2017.

Here's 9 fascinating science fiction books that came out in 2017:

1. The Collapsing Empire by John Scalzi

...because every book he writes is 1.5x better than his last.

The Collapsing Empire was, hands down, my favorite Science Fiction Novel of 2017.

What John Scalzi Does Well...

You'll love it if you also love:

2. Raven Stratagem (The Machineries of Empire #2) by Yoon Ha Lee

I love insanely large amounts of (fictional) death, destruction, and warfare on an epic scale.

Fortunately, so does Yoon Ha Lee.

His second book in the series doesn't "thrust you into the madness" as much as his first one does. But it still delivers.

Here's a quote from 1000YearPlan that I think sums up his books really well:

Before long though, this second dip into The Machineries of Empire gives the people what they want –the exotic weaponry, the surreal settings and gonzo space battles, Lee’s impossibly perfect prose...

My only gripe with this comment (I think) Yoon Ha Lee's prose is good... but far from perfect. And his dialogue is sorely lacking.

So far, the biggest complaint about Andy Weir's Artemis is absolutely right:

Everyone in this book sounds the same.

"In the future, there is a city on the Moon. And it's entirely populated by 13-year-olds and generic father figures."

I'm going to do a post on this soon, because there is such an easy fix to this mistake.

But if you can get past that... Artemis is an absolute pleasure to read.

Hard science fiction readers will love the in-depth explanations and machinations behind every piece of technology.

And, once you connect with the characters, the main story is actually pretty thrilling.

So I guess that means he's a pretty big deal.

I read Annihilation - no, I devoured it. It was creepy, eerie, and really easy to read through (or should I say hard to put down?).

Borne takes place in a different world, but I'm guessing I'll love it just as much.

What Borne Does Well...

Actually, Heradas has a great review of Borne on his website:

Ruinous ecology, strange bioluminescent life, forgotten memories, a misplaced sense of self-identity, life that might not be human, animals that (maybe) used to be human, a hint of something much larger happening on the periphery, a creepy company meddling in things they shouldn’t, and a perfect mix of mystery and resolution in the story. All told through beautiful prose that itself lends an eerie literary landscape for the rich characters to inhabit.

Ah, Star Wars. I will never stop talking about it.

But Disney on the other hand...

Well, they did something right recently: they let Timothy Zahn keep writing about Grand Admiral Thrawn.

Thrawn is his origin story.

I think everyone else have a luke-warm reaction this (pretty good, but not mind-blowing).

However, if you want to read anything "Star Wars" that might actually be good (and not the usual pandering cash-grab), Timothy Zahn is where you start.

A space opera with a smaller cast. This one-off novel comes hot on the heels of Ann Leckie's popular Ancillary Series. (It even takes place in the same universe).

The Tenacious Reader says the main character is:

...intelligent and resourceful and has a determination to follow through, even when the odds are stacked against her.

BiblioSanctum said the book had pacing problems, but was also won over by the main character:

The story also contains a more accessible and reader-friendly plot line, one that concerns itself more with intimate matters like family and friendship.

So if you're looking for a "less complicated" introduction into Ann Leckie, this is your chance.

What Ann Leckie Does Well...

Don't let that scare you. You can eat these novels up quickly.

As for this installment, here's a snippet from Tor.com's review this to say:

Persepolis Rising is ultimately among the darkest chapters of this insatiable saga.

What The Expanse Does Well...

The Expanse series is fantastic, hard science fiction. There's a reason they keep writing books (I say they, because it's actually two authors writing this together).

Now the SyFy TV Show on the other hand...

8. All Systems Red by Martha Wells

You had me at: "In a corporate-dominated spacefaring future..."

(Quote above from the Goodreads Description).

I've never heard of this Author until this year, but this is going up on my "Read next" list.

Why Should You Read This?

Listen to this line:

As a heartless killing machine, I was a terrible failure.

The main character calls itself "Murderbot." Because that is what it's programmed to do.

And then, decides to become something else. Such an excellent premise.

From what I'm hearing on the reviews, it's quick, witty, a little "fluffy" in places.

If you're interested in "Robots with Snark" you'll love this.

And one smart ass of a protagonist.

This one-off science fiction features an every-day guy who ends up thrust into the midst of intrigue amidst a horrible teleportation accident.

Some of the more popular and positive reviews were literally begging for people to go read this. For fairness's sake, here is one negative review that does a great job of crapping all over this book.

Here are all the lists so far:

Choose between my best articles, major story updates, or both.