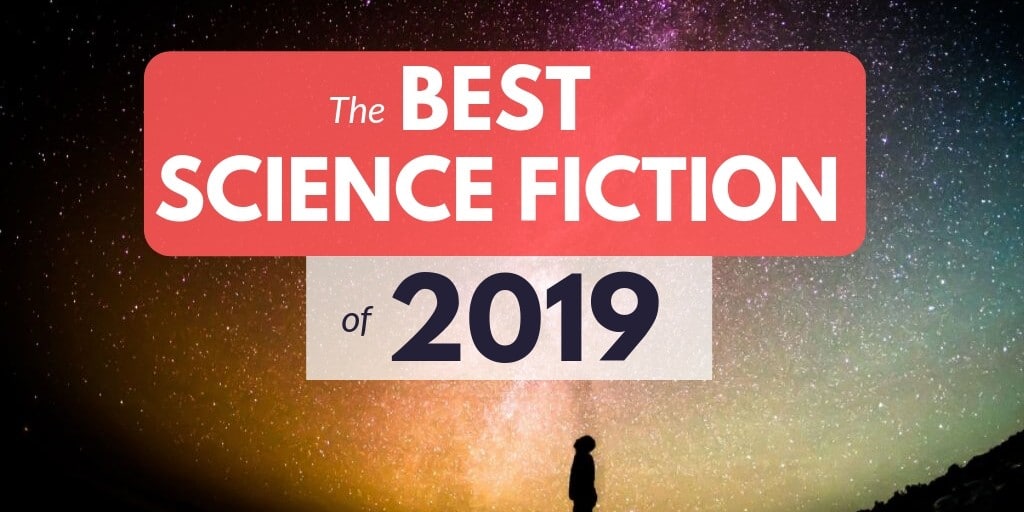 Looking for the best Science Fiction authors of 2019?

From vibrant space operas to cozy reads, and a few books stuffed with concepts that could change how you see the future… this list has all the good stuff.

Want More Books to Read? Check these out...

Great science fiction books that you can start reading NOW.

Carey, a caretaker android with a strong sense of human empathy, watches one of his patients die. This death sparks a new journey in Carey’s life as he transforms into something else.

This is a beautiful story about new experiences, new challenges… and new emotions and a more hopeful look at life with artificial beings.

False Memory Syndrome is spreading across the globe, and two people - an NYPD detective and a Neuroscientist - must join together in a mind-bending race to stop reality from collapsing on itself.

In this idea-packed thriller from Blake Crouch, memory and the past itself are under siege. Once again, Blake Crouch proves he is more than capable of taking a complicated SF concept - and turning it into a fast-paced thriller.

Mahit, an ambassador from a “small but fiercely-independent mining Station,” arrives in the center of an Alien Empire for two reasons:

As a fish out of water, she must navigate a dangerous alien culture, and make use of a secret technology to try and save her Station.

Two twins with very different personalities... and very special super powers. One creator, who wants to use their powers to attain a new level of control ...and maybe even godhood.

Complex, intricate, and full of strange plots and stranger narratives — there’s no way I can to sum this book up in a few sentences. You’ll just have to read it... =)

A fantastic short story collection with AI, ancient time travel, and discoveries to shake the definition of being human.

This is a story about comradery between daredevils, and the heart-stopping riches that await those who wonder “what if we could reach out and touch the stars…?”

That’s my favorite phrase one reviewer used to describe this book.

This is an ensemble story (ragtags and misfits who must band together) that takes place at the end of time. Pack your bags, you’re going to see some weird, some goofy, and some world-ending stuff.

Kenna, a young man being dragged across the universe by his parents, stumbles across the galaxy’s most renowned restaurant. Kenna falls in love with the restaurant, gets swept up in its affairs, and must find a way to save this grand cornerstone of culture from certain financial ruin.

9. The Future of Another Timeline

Two protagonists collide — Beth, who wants to escape a toxic life in the 90’s, and Tess, who comes from an alternative future where abortion is outlawed and the fight against mysogyny is raging. Together, they must fight to change their worlds for good.

Written by C. A. Fletcher.

A masterful story about survival in an apocalyptic wasteland… and getting your dog back. This book is a journey.

Four stories take a glimpse into our near future, with a focus on almost every current political hot topic; immigration, the 1%, toxic health care systems, and more.

In the future, a corps of soldiers use light-speed technology to teleport into battles… until one soldier gets unstuck in time… and sees things she shouldn’t be seeing.

Part military-fiction, part time-travel thriller, this one will keep you guessing until the end. This book does a majestic job of describing the feeling of being taken apart, particle by particle, as you are beamed onto another planet.

Continuations (sequels and prequels) tend to get higher ratings…

So, I’ve given these their own section. The numbers here are not necessarily in any order.

Written by James S. A. Corey.

A vast, hard-science fiction epic about Humanity’s expansion in the wake of massive alien discoveries.

If you’re a long-time fan of the series, this one will punch you in the gut.

Recommended for readers who love big, sprawling, gritty Space Epics with realism at the forefront

Get the first book: The Expanse #1: Leviathan Wakes

The second book in the second trilogy. I highly recommend this series, even if the first novel takes some suspension of disbelief.

The Red Rising Saga is a series about fighting against injustice, and how to survive even when you lose…

Recommended for readers who love hard fought battles against opression, emotional wins and losses, and fighting for justice.

15. Alliance Rising: The Hinder Stars I

Against a backdrop of bureaucracy, trade, and extremely questionable financial decisions, a new construction project puts the entire half-forgotten station at stake.

Recommended for readers who love trade route politics… in space.

Note: This is chronologically the first book in C.J. Cherryh’s Alliance-Union Universe, so you can either start with Alliance Rising, or read The Company Wars.

Hadrian bears a terrible burden on his shoulders. It seems nobody else but him can save the universe from a 400-year long war.

Perfect for young adults and fans of epic tales, The Sun Eater series chronicles the complete odyssey of a man as he becomes a legend amongst the stars...

Recommended for readers who love multifaceted, complex characters who brood over their dark pasts, and take responsibility for their future.

Get the first book: The Sun Eater #1: Empire of Silence

See the Empire from the inside…

Timothy Zahn once again delves into the intrigue and dark, political conflict that works behind the scenes in the galaxy’s most powerful government.

Recommended for readers who love Star Wars, especially the balance between right and wrong in the Empire.

This is an instant “must-read” if you love Jedi stoicism.

Claudia Gray sinks us into the dichotomy between Obi Wan and Qui-Gon Jinn, and their struggles to adhere to the moral code of the Jedi amidst a political conflict that is surprisingly complicated for a Star Wars story.

Recommended for readers who love Star Wars, especially if you played with imaginary lightsabers as a kid.

Children of Ruin is a story of evolution. It’s a story about a species of aliens created - accidentally - by human means. Now, in the second book, we get to see what happens when these two groups collide.

Recommended for readers who love evolution, particularly with giant, sentient insects and arachnids.

Get the first book: Children of Time #1

...but there was so much good Science Fiction this year. If you’ve already read the books above, these are for you.

Space pirates, ancient technology, and a quest to the edge of the universe.

Hexarchate Stories (The Machineries of Empire #3.5) by Yoon Ha Lee.

The Rosewater Insurrection (The Wormwood Trilogy #2) by Tade Thompson.

Science fiction set in Nigeria, about a community that lives on the edge of a strange alien zone.

Chain Across the Dawn (The Universe After #2) by Drew Williams.

A space Opera billed as “Game of Thrones meets The Expanse.”

The Outside by Ada Hoffmann.

Artificial gods, post-human angels, and a dedicated scientist who also happens to be autistic.

Fleet of Knives (Embers of War #2) by Garreth L. Powell.

Space Opera that takes place almost entirely aboard ships. Telekinetic powers, backwater planets, and a crew who finds themselves trapped between two foes.

The Lost Puzzler (The Tarakan Chronicles #1) by Eyal Kless.

A post-apocalyptic dystopia stuffed with ancient technology, mysterious practices, and a new hope for humanity. Sort of Mad Max-esque, but focused on narrative instead of action.

A series where each book is so different, you can almost read them alone. Read this series if you love stories about adaptation to life in space.

When an accident leaves most of humanity in a feral state, it’s up to our intrepid space janitors to save the world. Yes. Space janitors.

Oh, so janitors in space weren’t enough for you? What about a Repo-man/Con-artist who tells one lie too many?

Time travel and climate change, and a woman who begins to hear another voice in her head. Once again, Alastair Reynolds breathes new life into hard science fiction.

Check out the best science fiction of 2018 right here.

Also interested in fantasy? Check out the 17 Best Fantasy Books of 2020.

Thanks for reading! Tell me about your favorite Science Fiction book of the year in the comments below.