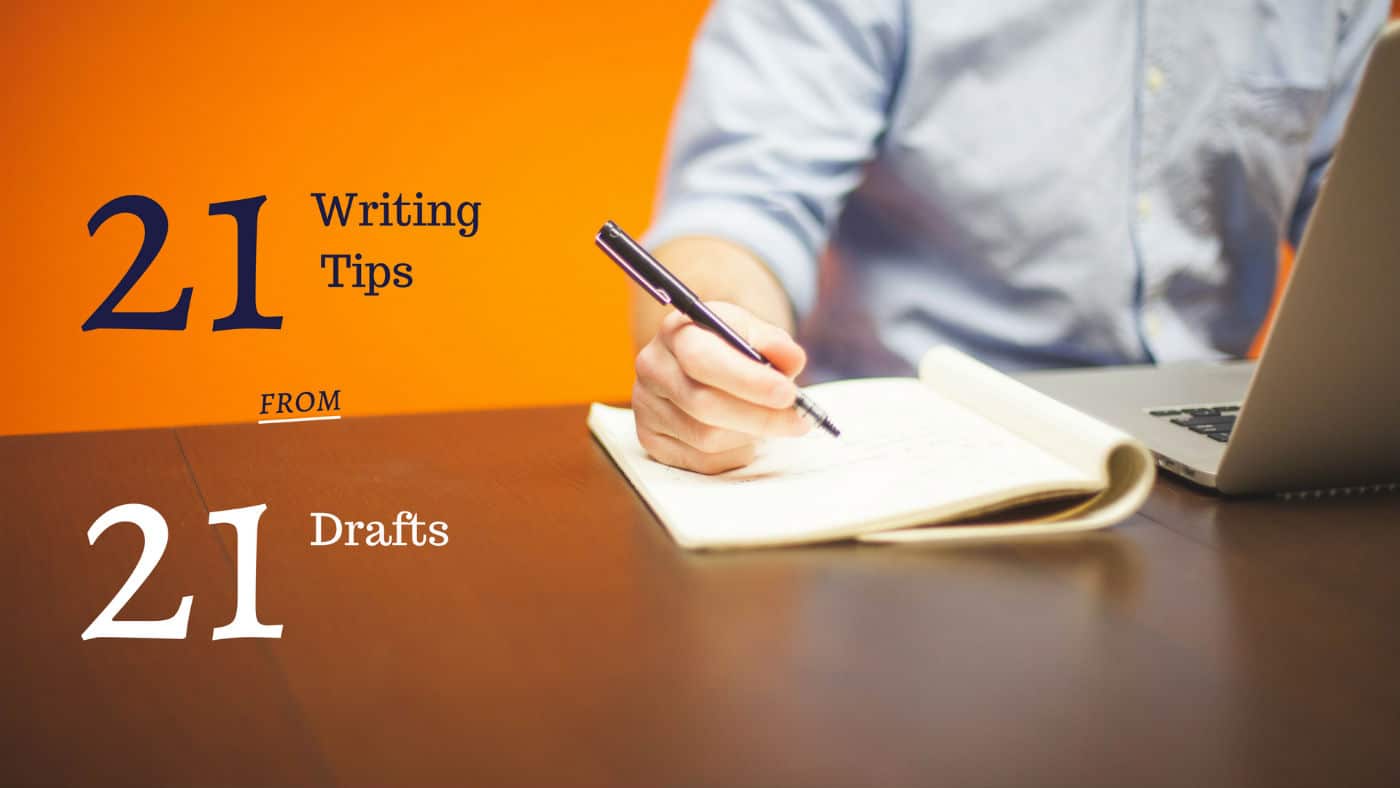 Last week, I finished writing the 21st draft of a short story.

I made a ton of mistakes, lost my way numerous times...

...and became a much, much better writer.

Here are 21 writing tips that took me too many drafts - and tears - to discover:

1. Why You Need to Love What You Write

This is the most important rule in all writing.

The short story started with an idea for an antagonist: he was evil, yes, but he also cared about the protagonist's safety.

Which made for a really interesting character idea in my head…

...but on on the page, it made him powerless and not very engaging. I was getting bored just writing about him, when he was supposed to be the harbinger of evil.

So I changed him. Made the next drafts a hundred times easier to write.

2. If You Love It Too Much to Kill It… It Probably Needs to Die

Which is a great lesson... but it's also really hard to get everything you love into 5000 words.

There were ideas that I desperately wanted to include. But there was a major problem:

I couldn't continue the story AND keep them in. I had to work through a bad case of writer’s block - because I didn’t want to kill the things I loved, even though I knew they didn’t belong.

Everything became so much easier, and focused after I got rid of those ideas.

3. Every Horror Story Has These 3 Vital Elements

I wrote a whole post recently on the 3 vital elements of every great horror story. Here’s a quick summary:

The post delves more into each element... so I won’t expound on them here. But I will say this:

Once you know these elements, you’ll see them in every horror story.

Go watch any horror movie trailer, and you'll spot them.

4. Finish, Sleep, Edit. IN THAT ORDER

When you finish a draft… put it away for at least a night.

Or a day, if you’re a night owl or nocturnal sewer mutant that only comes out at night and survives by eating drunkards and club-bouncing undergrads...

Sleep on it after you finish the draft. One of the worst mistakes in my early drafts was diving into the edits immediately after writing “The End.”

It’s too soon. I was too close to the story, still.

Or maybe this is good advice.

As soon as I finished draft #5 of my short story, I went back to working on my novel. A few months and one finished novel later, I returned to my short story...

...and couldn’t remember any of the ideas I needed to implement or sections I needed to fix. It was all gone.

That’s how I ended up doing a total rewrite for draft #6.

6. Take Notes of What You Want to Change

About this time, I realized that I could leave notes for myself while I wrote.

(I use Google Drive's comments feature. Your word processor probably has a similar function.)

Anyway, I made "difficulty tiers" for my fixes:

7. But Don’t Rewrite While you Write…. If You Can Help It

Everyone has an internal editor.

And everyone who is working on a first draft needs to grab that internal editor by the collar, and shove her/him into a one-room prison cell with no windows or bars, and slam the door shut.

Do NOT let your self-editor out while you are composing new drafts.

Let her/him out on the final cuts. Any time before that, they’ll just distract you from finishing.

I think this one took me about a year, start to finish (all 21 times).

It doesn’t have to take you that long, but watch out. Make sure you really care about the story you’re going to write.

So you think your story is perfect? You think it’s ready to get published?

Get some other eyes on it first. A professional editor is a fantastic way to go… but never undervalue the ability of your bookworm friends.

My beta readers were (and still are) infinitely invaluable to me. So, to demonstrate my eternal, immortal, unending gratitude… I bought them pizza.

10. Short Character Descriptions are Powerful, Too

You have no time.

Thus, the best character descriptions are:

(This is why I think everyone should try to write at least one short story - to learn how to lean into the leanness of length).

11. How to Make a Character Likable

In most cases (I say most, because I truly believe there are no hard rules in writing), you need to love your hero.

How to Make Likable Characters

Before focusing on the traits in that list above, my characters were all too selfish, or generally bland.

12. How to Make a Character Hateable

Your villains must have the power to make you hate them.

The best way to do this?

Take that list of likable traits above, and turn it on its head. Instead of petting the dog... your antagonist may kick the dog. See, you hate him already!

Character backstory will also go a long way to making you hate a character, especially when you focus on their defining moment. 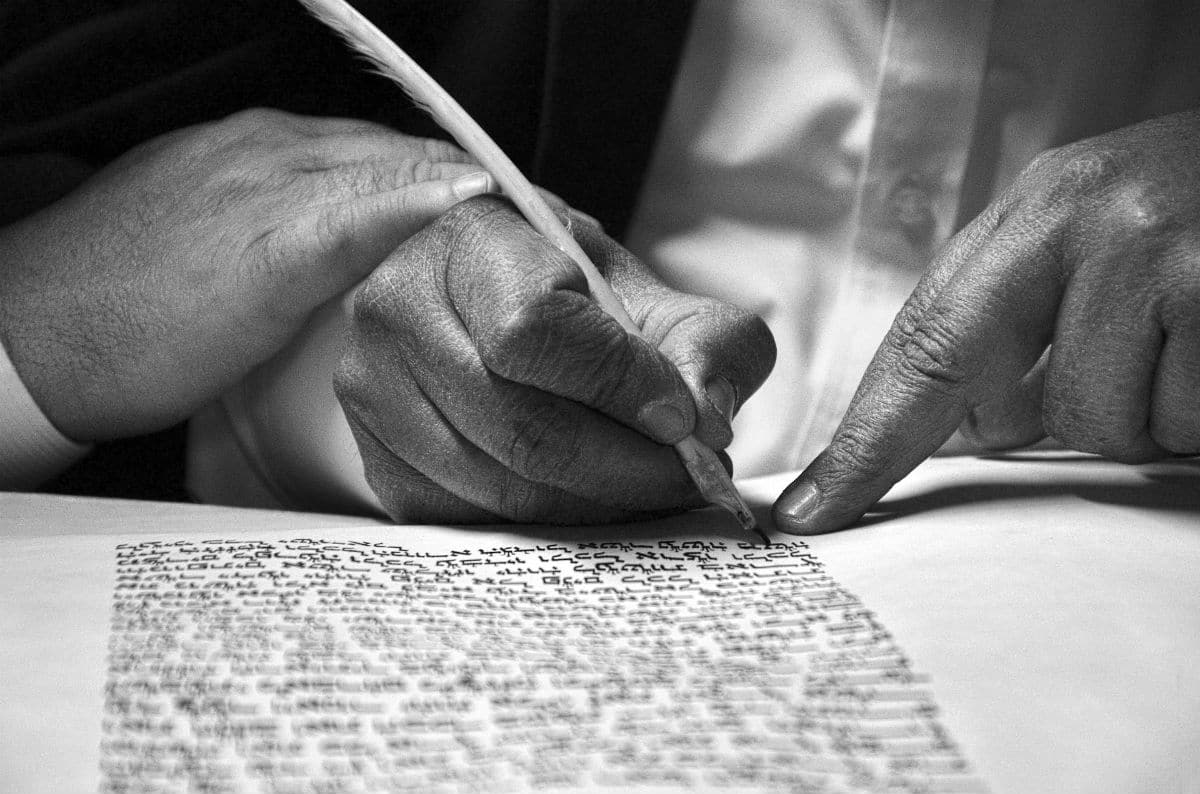 13. How to Write Better Dialogue

But there are a few tricks to build the illusion that - yes, these are real people having a real conversation.

This story was probably the most I’ve ever practiced my dialogue. When - if - it ever reaches the public, I hope it’ll stand up to scrutiny, at least in the conversations.

Here’s a few tricks I borrowed from Hemingway that made a huge improvement on my dialogue.

14. Too Many Drafts will Swallow the Original Vision

The central themes, the climactic moment - all of it.

It’s up to you to decide if that’s a good thing or a bad thing. For me, it was necessary.

This is one of the easiest ways to improve your story, draft to draft.

Can you raise the stakes higher?

Can you show what this means (emotionally and logically) for your character?

By draft #16, you should seek professional help.

Mental hospitals are expensive. So I suggest you try an editor.

Mine was incredibly invaluable ... and I didn’t even have to take any pills!

Even if it’s a Godless, off-the-rails trainwreck.

You’ll learn more by finishing than you ever will be starting… over and over again.

(I confess, I made that mistake more than once).

You need to be fast in a short story.

There isn’t time to wax poetic about the way the light filters in through the windows.

Short stories teach you how to get to the good stuff, and cut out everything else.

Do you really need that character?

Does she really need that many lines?

How can you cut out as many extra setting changes as possible?

Here’s a good formula for short story length that will help you understand how long your story is going to be… before you even write it.

20. First Drafts Are Still “the Early Stages” of Writing

First drafts are a huge deal.

But… it’s only the beginning.

Don’t give up, especially when the story really matters to you. Editing can be a slog, but it will make you a much better writer…

...and there’s nothing better about putting the final touches on a story.

You’re going to be absolutely thrilled with yourself.

And, when you get to the end of that process, you’ll be better than 80% of the other writers out there who never finish anything.

If you’ve never written anything to completion, I suggest you grab the best short story idea you have, and get to it.

You’ll learn a lot… and you might even get it published one day.

Good luck. Go forth and write!