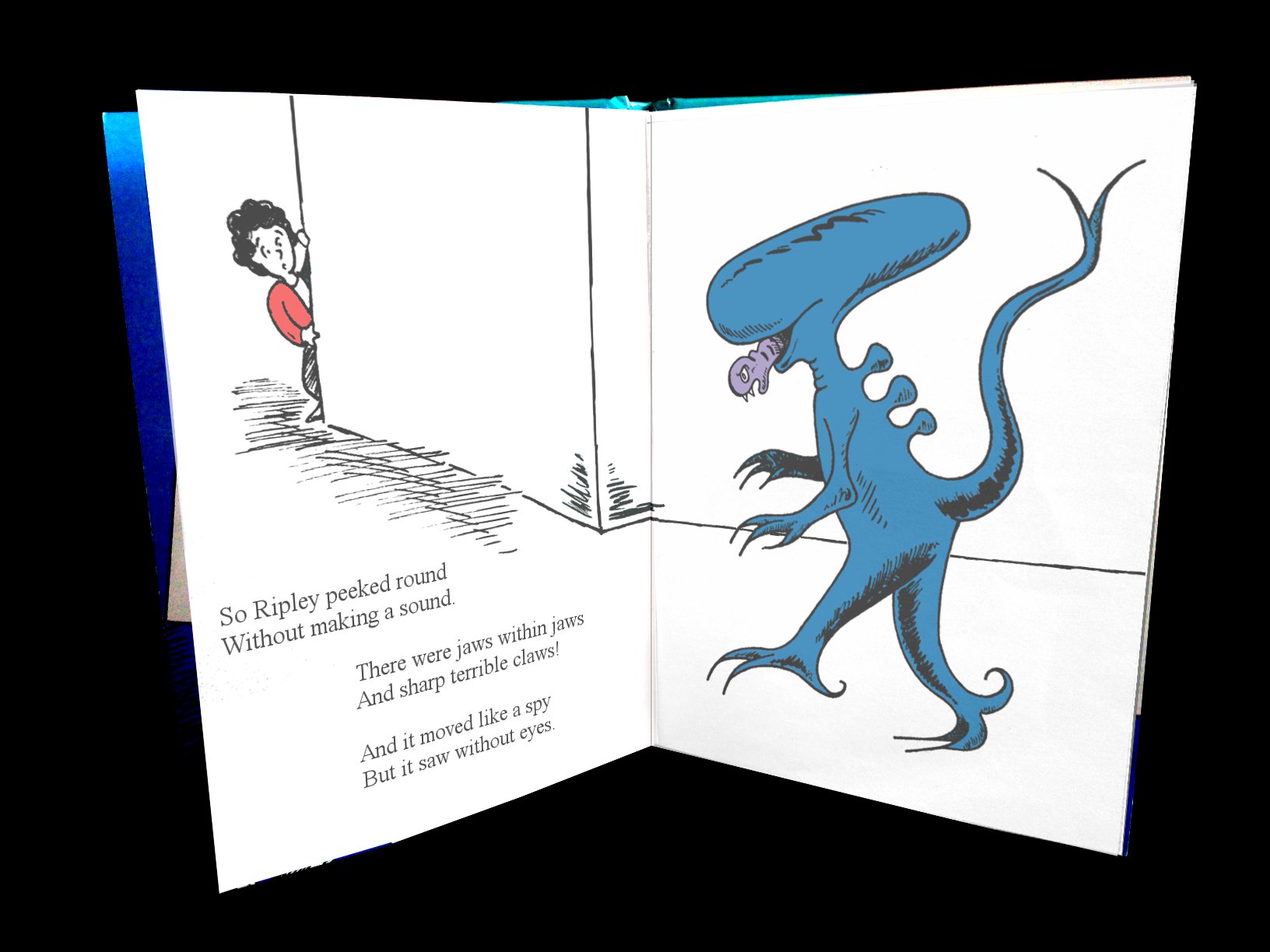 In a green, green meadow by the white, stark tundra, stood a bright, young girl beneath a spaceship's dark umbra.

With her mouth in the shape of a big, empty "O," she watched the ship rattle and sway, lights all aglow.

Not long did she stare, before the ship began to break. It crashed to the Earth with a ground-shaking quake

She rushed forward - so filled with desire - to discover who it was; "Who owned the crashed flyer?"

They poured out in pairs, their tiny forms a-hopping, and made sounds with their mouths; a gentle *pop-popping*.

A pair wriggled over to the girl in the meadow, "*Pop-pop!*" they said, waving their tiny, squiggly elbows,

For their arms were not arms, but long, sticky tentacles, each one was yellow, or purple, and freakishly flexible .

Their legs were squiggly too, and they flopped over the Earth as they made their way to the girl, who giggled with mirth.

The affectionate poppers with which she was smitten, were feral and vicious and horribly wicked.

They opened their mouths, all *pop-popping* at once, and took, in unison, a big, bloody munch.

Her screams, it is said, can be heard to this day, in that green, green meadow, where the pop-poppers yet prey.

A sound, a call, a boisterous bellow! Lifted up at the frozen edge of the meadow.

Ululating, undulating over lonely winter plains, the ruckus heeled the pop-poppers back on their reins.

They screamed and cried their pop-popping song, as the fury rolled over them, angry and strong.

*Pop-pop* they unstuck themselves from the girl’s bloodied bones, and huddled under the wreckage of their once-hovering home.

Booming and clattering and cranking and groaning, machines crawled into the meadow, some creaking, some droning

The sky turned red and filled with smoke, and even the machines began to choke.

Poppers writhed, their tentacles flailed. Squirm they did - and screamed - and waled.

But their numbers were too great, and could not be dispensed, the Poppers surged and moved to offense.

They swarmed over the machines in pop-popping delight, and shredded both flesh and metal alike.

Despair was at hand, the end was nigh - it was clear, just now, who was the superior tribe.

Hark! In the heavens, a hole opened up! And down came a spaceship shaped like a cup.

Out poured a pop-popper of ultimate size, her girth spilled over and blanketed the skies

Her tentacles were long, and vibrantly hued, her face was ghastly, her eyes sharp and shrewd.

“At last!” Her voice thundered, “You have found my lost kin! They are terrible children, they do love to sin.”

The machines and men both stared, mouths wide agawp, as the giant popper climbed in her ship, and closed up the top.

The ship took off with a dazzling spin and a twirl. The poppers left Earth, leaving only confusion, and ruin, and the bones of a girl...

Sharing your stories is probably one of the scariest things any writer can do, which is why I'm forcing myself to do it. This story was born of a prompt about writing a Dr. Seuss-style Alien-on-Earth story, and - originally - I told myself there was no way in hell I was going to write it.

But you know what? I did. I wrote it. And it was fun. The story isn't perfect, there's a few errors with the meter (you might've been thrown off a few times by that!) - but it feels good to write and not worry about how perfect something could be.

What Have You Been Writing Lately?

Recently, I've been bowing to the greater demands of my readers on Reddit - which means I'm now slaving away on at least 3 different serials (and trying to wrap up 1 or 2 others).

ALL of these continuations are stressing me out, and I'm terrified of writing them. But I'm doing it anyway.

So, how have you gotten over your fear of writing this week? And what have YOU been writing lately?

Related: These 6 Books Taught Me How to Write Better