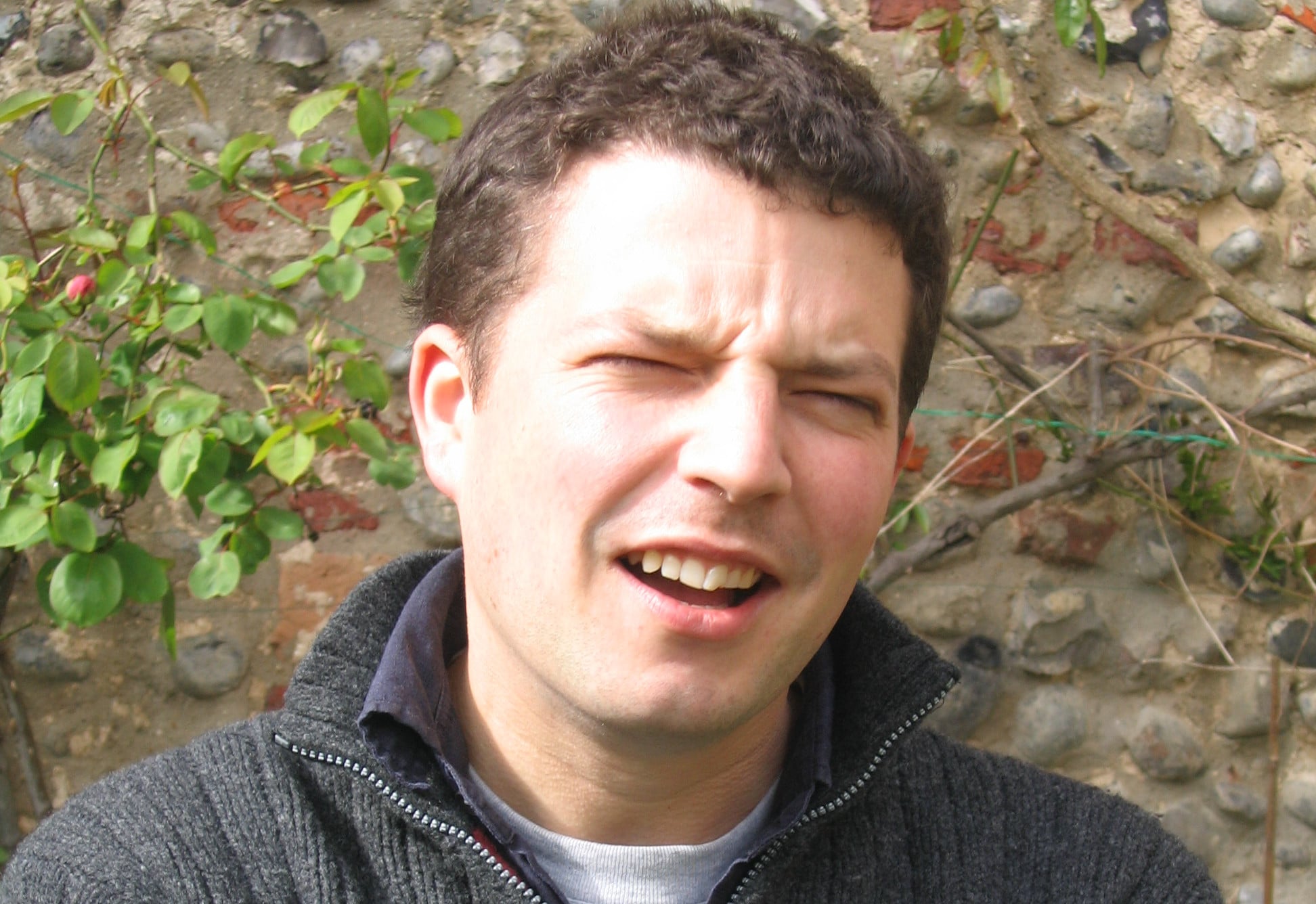 Professor Lou Pole, possibly the greatest mind of his generation, had no business leaving his prestigious (and very high paying job) at ELITE AND NEEDLESSLY EXPENSIVE UNIVERSITY.

When he told his adjuncts and fellow professors where he was moving, each and every one of them responded with an expression of disbelief - a laugh, a gasp, a mystified shake of the head. Aiden Ungerton, the Departmental Head of Physics, posited that perhaps, at long last, Pole's vast intellect had proven too heavy for the stringy old man, and had buried him in a self-destructive bout of insanity.

Yet, when Professor Pole hopped off the train, a tiny suitcase rolling behind him, there was a whistle on his lips, and an unusual energy to his step.

He arrived in Podunk, Oklahoma, where not a single person knew his name, his legacy, nor much of anything regarding the modern scientific advances of the last five hundred years. It was a dream come true. He bought a barn, a peaceful retreat where his gadgetry and testing apparati could sprawl and be tinkered on in peace. Not to mention the rent was about one fifth what he paid for his dusty, cramped apartment.

The simpleton who hauled his equipment, his instruments and devices and other gizmos, was a giant, friendly boy - about the age of the students he had taught at EANE University. The simpleton, Job, or James, or some such folksy name, was a curious fellow and after he spent many, many sweaty hours hauling in Professor Pole's precious items, Jack (or Jonathan) began to prod.

They were in the barn, surrounded by scattered tools and chunks of machinery. Lou had his finger pressed to his lips, trying to envision where his appliances should fit, when the simpleton's deep voice rolled down from the rafters:

"Is this a laser gun?" Jacob held out a device, vaguely shaped like a hand-held firearm.

Lou was about to snap at the boy for the umpteenth time to put that down! Don't you know what fragile means?Instead, he raised his eyebrows in surprise - this time, the boy was close with his guess, "No, that is a Lidar Gun."

The last item the simpleton picked up, he guessed was a tiny teleportation device. How the boy even knew the word teleportation was a bottomless mystery. It, Lou had to explain, was actually a hotplate, and that the boy should put it down, now, please.

"A Lidar gun?" the boy tried out the words, "Kind of bullets does it use?"

"It is not a weapon," Lou said, "It's used to measure the speed of certain objects."

"Oh," the boy said, his enthusiasm sapped by the mundanity of the Lidar Gun. He tossed it over his shoulder with a shrug. Lou cringed with every clattering bump.

"Joseph," Lou hissed through his teeth, "I think I've had enough help for today, thank-"

"What's this?" Joseph (?) yanked something out of a crate - metal and plastic and mirrors and wires accordioned out of the crate, and slipped out of his hands.

Lou heard the dull 'oops' in the very instant before the one end of the contraption crashed to the ground. His heart stopped. He turned around, expecting to see one of his priceless microscopes or particle beacons split to tiny, irreparable pieces.

A sigh of relief blew through his lips - it was only that infernal "portable Rube Goldberg" gimmick Professor Englebert bought him as a going-away gift. In fact, Lou did not recall ever packing the device, yet now the useless, space-filling trinket, was spilling down from the loft like one of those children's matchbox car tracks.

"That is ..." Lou couldn't think of a way to explain it to the boy. He made a 'why not' face, more to himself than to the simpleton, and said, "That is yours. You can have it."

The boy's eyes lit up brighter than a solar array, "No way!"

His use of the colloquial phrase confused Lou. Did that mean no, as in no thank you? No way as in he couldn't possibly? No comma way, as in-

While Lou was sussing out this latest puzzle, John (or was it Jason) had disappeared in the loft again. He came back out, holding a very, very fragile grape-shaped object - a clear prism that Lou had specially made for one of his failed projects.

The production of that grape cost more than a full-ride through EANE University.

So when Lou sucked in his breath, he had every intention of screaming at the boy to put that down RIGHT NOW PLEASE. Instead, he choked, and made an embarassing gleep sound.

Each hit was a needle-prick to Professor Pole's pumping heart.

He watched as it fell all the way to the bottom, only to touch that last, spring-loaded lever and zip right back to the beginning.

"Whoa..." the boy said, not bothering to close his jaw. The Lidar gun fell to his side.

The grape fell faster this time. The loop was completed in about half the previous time, and showed no signs of slowing.

A realization shuttered through Professor Pole's mind - a blink of a thought, a rejection, the thought reinforced, denial, the thought backed up by visual evidence, and so on. It took several iterations for his brain to accept that maybe, just maybe, this was the beginning of an impossible hypothesis.

He, Professor Lou Pole, was witnessing the first ever infinite loop. No loss of energy. In fact, quite the opposite.

Professor Pole's eyes glassed over, his mouth hung open; a perfect mirror of the Simpleton boy.

Break it down, put it back together, hold your breath and do it again. Two more tests. Four more tests.

"Look, Doc, it's still doing the thing that made you get all-" the Simpleton flapped his arms in a cheap imitation of Lou's very well deserved excitement.

Turns out the Simpleton's name was Kacey. No J at all.

Good God, what kind of person names their son Kacey?

"Kacey," the Prof's voice was creaky with frustration, "How many times do I have to tell you, I am not a Doctor. I am a Professor of Physics, with several philosophical doctorates. There is a difference, you see."

Professor Pole pushed gestured with his hands, pushing at the air as if he could force knowledge (or at least a mote of common sense) into the boy's mind.

"Several ... doctors?" Kacey said. Lou could almost hear the gears churning in his head, "So, I gotta call you... Docs?"

Professor Pole lifted his eyes to the rafters, muttering to the divinities that might be, more out of convenience than belief. A hitching sound - zzztak - zzztak - came from the Rube-Goldberg/Infinite Energy machine. The Grape was a blurred line now, you could see it's path down the track, but not the Grape itself.

It showed no signs of stopping.

"Kacey, bring me my phone please."

An image flashed through his mind - a half-hour search through the piles of gadgets and gizmos, cracked screens and scopes, shattered glass everywhere. The end result: a simple-minded boy, asking "Is this it? What about this one?" and promptly tossing another very expensive piece of equipment over his shoulder to crash among the other broken things.

"Wait, never mind, I'll go get it. You, stay right where you are. Don't touch a thing."

Car. There it is. Beep beep boop. Ring. Ring. Come on. Rinnn-click.

"Englebert," he whispered, his legs carrying him automatically to the barn door, half ajar. He wasn't sure why he was whispering, but it seemed like appropriate given the gravity of his discovery, "Englebert, can you hear me?"

"Hey, Lou! Did you get find my little package?" Chuckle chuckle.

"Englebert!" Professor Pole hissed, "Did you see it? Did you see what that thing did?"

Something hummed in the air next to his ear. Both ears. Lots of insects in Oklahoma. Good thing he'd be staying inside most of the time.

*"Lou, it's a Rube-Goldberg machine. It's not magic or any-"

"Okay, calm down there Cowboy. You get some heat stroke? I told you to hire a mover-"

"Listen," Professor Pole squeaked, "Listen to me! Do you remember that orbicular prism I had made last year?"

"For the acceleration project, right?"

"It dropped in. The machine - it threw it back. It increased its speed."

Buzzzzzzzzzz. Lou looked around, trying to find whatever giant insect was making that sound. All he saw were swaying trees and the barn. Shadows moved inside, just beyond the barn door. He picked up his pace.

*"Lou, I don't understand, what are you saying?"

"Infinite. Energy. The Law has been broken."

"Lou," Englebert said, just as Professor Pole placed his hand on the door, "You can't break the laws. I don't know what you think you saw, but it wasn't a broken law."

But Lou was not listening. He had pushed open the door, and the source of the buzzing was revealed: inside, the Simpleton had stacked a few appliances that definitely should not have been stacked on top of each other. The appliances - one a machine washer-sized particle accelerator, the other a magnetic field emitter that looked like an old record player, were also plugged into an experimental generator. All three were sharing the same power strip.

Bolts and screws and light plastic and packaging peanuts were drifting in mid air, either bouncing softly against the ceiling, or bobbing like metal fish in an aquarium.

The phone fell from Lou's hand.

This week, I spent far too much time reading Stephen King's The Shining. If you've never read a Stephen King book, this is a good one to start with. Paranormal occurrences, expert storytelling, hyper-realistic characters, and, of course, horror.

I plan on visiting this book for blog posts in the next few weeks because Stephen King's ability to suck in readers is both inspiring and mystifying.

Seriously, this book took over the last four days of my life.

Questions for you, dear reader: How do you balance your writing and reading? How much do you think you write vs. read in a given week? Do you find you prefer to read at certain times, and write at others?