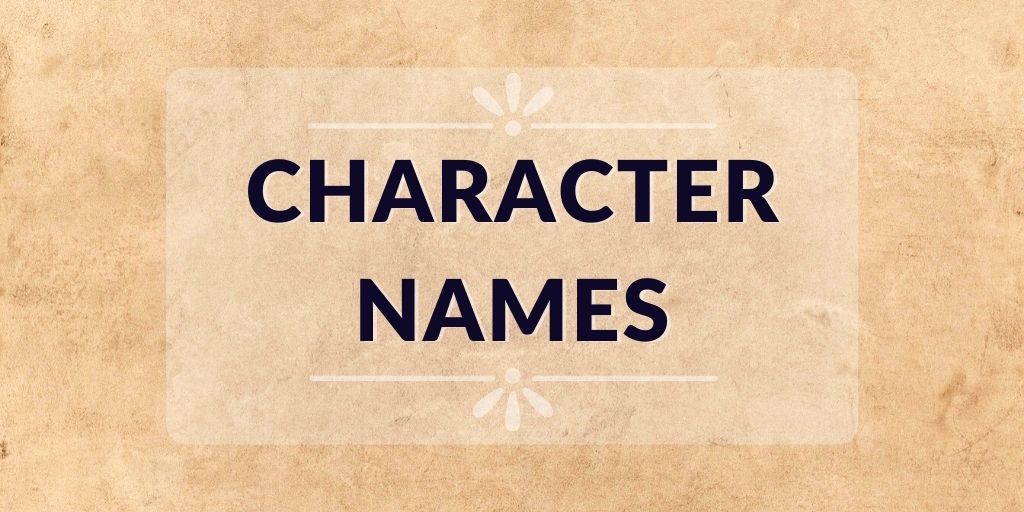 Need the perfect name for your character?

Before you dive into the endless fountains of name generators, here's something to consider...

The right character name should do two things:

Han Solo is a lone rogue. Shrek is rough, even for an ogre. And Cinderella is a princess chained to a life of chimney-sweeping misery.

The trick is to find a balance. Good names must be believable, but they should also capture the essence of your character.

Here, I'll show you the best ways to create the perfect names for your characters:

1. Borrow a name from the real world

Use online name repositories, or get a good name generator.

Here are a few resources for both...

The Best Places to Find Real-World Names for Your Characters:

If you’re in a rush, but you want something more original, try one of these name generators below.

The 3 Best Name Generators for Writers

But... if you always use a generator, you will never learn how to craft original, compelling, unique names that add both to your characters… and your world.

To do that, we must look at the more advanced strategies...

2. Take two names, and blend them together (there are two variations of this).

This is a true story: In 2002, two Hollywood celebrities that I don’t care about “became an item.”

To lighten the load of too many syllables, Ben Affleck and Jennifer Lopez’s names were shortened to “Bennifer.”

There are better ways to come up with names. Here are a few examples that don’t sound quite as ridiculous:

If you consistently use names from two cultures, you can make your own style of names. Take greek prefixes and japanese suffixes, for example:

Name blending works best for fantastical worlds and speculative fiction, but you will also find combinations that sound “real.” Use this name blending tool if you want to see all the variations of name combinations.

When he started writing his medieval-fantasy series, George R. R. Martin wanted to preserve that unique medieval flavor… despite writing in an entirely fictional world.

Martin accomplished this by tweaking medieval names, sometimes with a single letter, to make it sound exotic, fresh, and yet somehow familiar:

Use this strategy to easily insert a set of unique naming rules, without having to come up with 100+ character names from scratch.

Get it as an ebook, paperback, and workbook!

3. Use sounds and imagery to craft “personality” names.

Some authors create names based on the personality of the character.

This lets you see the character the moment you meet them:

Luke Skywalker is a hopeful dreamer with eyes on the horizon. Wolverine is closed off and viciously defensive. Even the name “Scrooge” evoked a sense of squeezing and selfishness to readers in the 1800s.

Think about the physical features or personality traits of your character. Many of the names in the Harry Potter universe use a character’s personality as the basis for a name. For example, Voldemort means “Flight of Death” in french.

3 simple questions to help you craft a personality-based name:

Every fictional world lies on a continuum of reality and fantasy.

Compare two of my favorite space operas: The Expanse vs. Star Wars.

The Expanse leans into realism and uses modern-day naming conventions for names like Amos Burton or Chrisjen Avasarala.

Whereas Star Wars emphasizes the strangeness of the alien zoo:

The choices you make while building your world will influence your names.

You wouldn’t see a name like “Robert Smith” in the Star Wars universe. And you wouldn’t see someone named “Sebulba the Dug” in a Jane Austen romance.

The good news? It’s a symbiotic relationship. Worldbuilding helps you craft names, and character names color in your world.

Take a few names from Joe Abercrombie’s The First Law, for example:

These characters populate a world that is brutal and unforgiving. But each name adds another stroke of life to the world. Especially that last one, you have to wonder: “What is the story behind that name?”

Where do names come from in your world?

There’s a great book called Middlegame, where sets of twins are born with complementary superpowers. For example, one twin is a math genius, while the other is gifted with words.

In this world, the twins’ names always rhyme. Daren and Karen, or Roger and Dodger.

At first, it seems quirky and maybe a bit wrong. You think, “Nobody would name their kids like that. That would be cruel.”

Then, you discover that the parents aren’t the ones giving the names. These twins are laboratory experiments, crafted by a corporation that needed an easy way to remember who was related to who. It’s much easier to remember if the twins’ names rhyme.

Was this character named by their parents? Or by someone else?

What are the naming traditions in your world?

Stay consistent with your world’s rules.

When working within epic fantasy or science fiction, rules are where the magic happens.

As a linguist, J. R. R. Tolkien spent the better part of his life crafting his universe. Even the names in his worlds followed specific sets of rules:

Tolkien certainly had other naming rules, but the point is he stuck to them. The rules give the world a hefty sense of realism, which is critical in a fantasy universe.

As a bonus… once you have rules, you may find a good reason to break them. The first time you hear the name “Gollum,” you know there’s something off about this character because it so obviously breaks the naming conventions of Middle-earth.

5. Keep a list of good names in your pocket.

There’s a list on my phone that’s over a hundred names long.

...or when a name flutters into my mind…

...or when I’m working on names and come up with a good one that doesn’t fit my current project, I will store those names in my list.

Sometimes, just looking at this list will provoke new name ideas for my current novel.

“Who knows a man's name, holds that man's life in his keeping.” - Ursula K. Le Guin.

There is no perfect name for anyone character... there are hundreds.

The power of a name comes from you, and the choices you make with this character.

"Can you find meaning in this name? Does it make it easier for you to bring this character to life?"

If you can answer yes to those questions… then stop searching. You’ve found the right name.

And remember to let good enough be good enough. Your main character may never have a perfect name, which is a good thing because heroes should be imperfect, anyways.

The idea of “perfect” is ever-changing, so don’t get hung up. Choose a name, try it out, and stick with it.

Nine times out of ten, it will grow on you. That’s the secret.