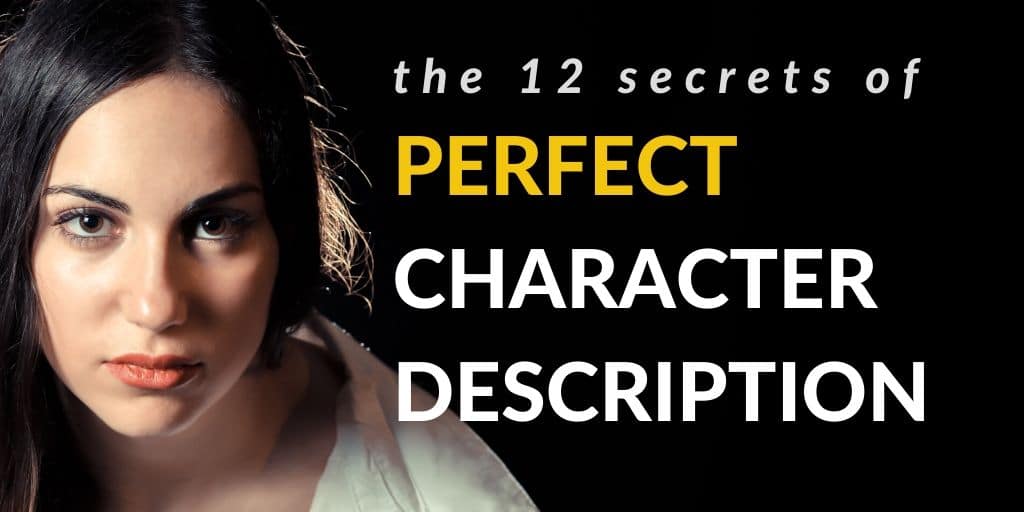 The 12 Secrets of Character Description

Ask anyone to describe their favorite character.

9 out of 10 times you'll get surface-level answers: what they look like, what they're wearing... But the truth is most people don't understand what makes a great character... let alone how to describe them in fascinating detail.

So I did some research...

...and I found the 12 most powerful tools for describing characters. These are the tools used by professional authors throughout the ages to immediately paint vivid characters in your mind (I've even included my favorite examples).

Once you get the hang of these tools, you'll be able to create beautifully-detailed characters, effortlessly.

1. Why Description is Critical

The Harry Potter novels were stuffed with outstanding examples of character description.

Even the title of the very first chapter hooks you into the character:

“The Boy Who Lived.”

Good character description allows you to do more than talk about your character’s physical attributes...

...it lets you make your ultimate promise to your readers. “This character is supercharged with dramatic tension. Keep reading, and I will show you their destiny.”

"Imagine that his face aches from smiling. He’s been smiling for hours: teeth clenched, lips drawn back, eyes crinkled so the crow’s feet show. There is an art to smiling in a way that others will believe. It is always important to include the eyes; otherwise, people will know you hate them.'

2. When Should You Describe Your Characters?

As soon as you put a character into the story, an invisible clock starts to tick. The longer your readers go without “seeing” your new character, the more disconnected from the story they become.

Descriptive text is the gravity of that keeps us grounded in your world.

So, describe your characters at the first organic opportunity.

“Save the best for last” is awful advice for writers.

Start with the most unique, differentiating visual aspect to your character. For example, nobody refers to Captain Hook as “the pirate with the feather in his hat.”

When your main character enters the story, you want your readers to know immediately that something is different. Something is out of place...

"VICTOR readjusted the shovels on his shoulder and stepped gingerly over an old, half-sunken grave. His trench billowed faintly, brushing the tops of tombstones as he made his way through Merit Cemetery, humming as he went. The sound carried like wind through the dark. It made Sydney shiver in her too big coat and her rainbow leggings and her winter boots as she trudged along behind him. The two looked like ghosts as they wove through the graveyard, both blond and fair enough to pass for siblings, or perhaps father and daughter."

3. How Much Description is Too Much?

One writing mistake I see newer writers make too often: too much character description.

Avoid the mirror scene: “She stood in front of a mirror, and this is what she saw…”

The true skill lies in quickly adding visual depth to any character. This is especially important in stories with large casts… because most physical attributes will be forgotten.

Start by describing the character aspects that:

Example from Brandon Sanderson’s The Way of Kings:

"The king shone in his golden armor, one of the finest suits of Shardplate in Alethkar. Gold-trimmed with sunbursts on the shoulders and breastplate, the armor was topped by a helm mounted with four intricate spikes. Yet, majestic though it was, the armor looked wrong on the young king. Dalenar still expected a different face to look out from that helm—a face aged with wisdom, not young and untested."

You don’t need to stop everything to introduce a new character.

Show us what they look like when they move. Pair up your descriptions with verbs, and watch your character come to life.

"...the hulking albino named Silas limped through the front gate of the luxurious brownstone residence on Rue La Bruyere. The spiked cilice belt that he wore around his thigh cut into his flesh, and yet his soul sang with satisfaction of service to the Lord."

Now available as an ebook, paperback, and workbook!

5. How to Describe (without Describing)

Not all descriptions must be physical.

A reader’s imagination is a powerful tool, and you can tap into it by focusing on the mannerisms and the personality of your character. Use these to skip past mundane descriptions of hair color, eye color, etc.

What does Crake look like to you in the example below?

"He was annoyed with himself for jabbering and capering, while Crake gave him brief, indifferent glances, and that one-sided demismile. Nevertheless there was something about Crake. That kind of cool slouchiness always impressed Jimmy, coming from another guy: it was the sense of energies being held back, held in reserve for something more important than present company."

What your characters wear will tell you exactly where they came from.

Objects also make it easier to imagine the character as a real person, handling a real thing.

Example from Stephen King’s The Gunslinger:

"Below the waterbag were his guns, carefully weighted to his hands; a plate had been added to each when they had come to him from his father, who had been lighter and not so tall. The two belts crisscrossed above his crotch. The holsters were oiled too deeply for even this Philistine sun to crack. The stocks of the guns were sandalwood, yellow and finely grained. Rawhide tie-downs held the holsters loosely to his thighs, and they swung a bit with his step; they had rubbed away the bluing of his jeans (and thinned the cloth) in a pair of arcs that looked almost like smiles. The brass casings of the cartridges looped into the gunbelts heliographed in the sun. There were fewer now. The leather made subtle creaking noises."

7. Exaggerate Your Descriptions with Shocking Emotions

Make your readers breathless with the first look at your characters.

Be poetic. Exaggerate the ordinary. Tap into the deepest, strongest emotions for your characters.

Example from J. R. R. Tolkin’s The Fellowship of the Ring:

“The face of Elrond was ageless, neither old nor young, though in it was written the memory of many things both glad and sorrowful. His hair was dark as the shadows of twilight, and upon it was set a circlet of silver; his eyes were grey as a clear evening, and in them was a light like the light of stars.”

Every physical attribute of your character can tell us about their future.

The goal is to leave the door open - just a little - so that a million questions can fly inside.

Here’s an example where the author uses description to foreshadow the dark turn this story is about to take...

Example from Haruku Murakami’s Kafka on the Shore:

"My sister’s looking off to the side so half her face is in shadow and her smile is neatly cut in half. It’s like one of those Greek tragedy masks in a textbook that’s half one idea and half the opposite. Light and dark. Hope and despair. Laughter and sadness. Trust and loneliness."

When it serves the purpose of your story, it pays to misdirect your audience. Look at this next example to see how J. K. Rowling kept her early readers guessing.

When we first meet Harry Potter, his life is miserable. He lives under the thumb of his abusive uncle and aunt, and must constantly avoid the tyranny of his cousin.

When Harry finds a spark of hope - a letter inviting him to leave this world - his uncle shreds it to pieces.

There is no hope for Harry. So when this grizzled giant shows up on the doorstep, looking for Harry, we know to expect the worst:

“A giant of a man was standing in the doorway. His face was almost completely hidden by a long, shaggy mane of hair and a wild, tangled beard, but you could make out his eyes, glinting like black beetles under all the hair.”

But J. K. Rowling must’ve smiled while writing Hagrid’s introduction because this terrifying giant is Harry’s knight in shining armor.

Keep your readers on their toes. Be unexpected.

10. Use Description to Add a Captivating Atmosphere

As readers, we want to be locked into the frame of your story. We want to breathe in the air of your world, and to forget we're reading a book.

Your tone, the setting, everything about your world must be immersive.

Even your character descriptions can add layers of atmosphere to your story.

Look at how the author imbues his character descriptions with this unique tone. This passage is an introduction to the two most dangerous characters in Neverwhere:

11. Describe Characters Through Your Narrator’s Voice

Who is describing all these characters in your story?

When you filter your descriptions through a specific person’s thoughts… you pack twice as much meaning into every word.

Not only does it tell us about the character being described… It also speaks volumes about the Narrator - how they think, how they treat others, or how they deal with conflict.

Like the rats that spilt from the gangway, she was exactly the type of creature I’d expected to find living in New York. Arrogant, pushy, proudly, almost fascistically opinionated, she was the person you found yourself quoting at dinner parties, especially if your hosts were on the delicate side and you didn’t much care about being invited back. Helen on politics, Helen on sex, Helen on race relations: the response at the table was almost always the same. ‘Oh, that’s horrible. And where did you know this person from?’

This is the secret that separates the professional writers from the eternally aspiring amateurs.

Some new writers spend months dreaming up their characters. They conjure up lists of attributes until they map out every inch of a character. They might even spend weeks drawing their characters by hand.

Perfection is a great way to never finish your story.

Dreaming is a necessary part of the writing process. But it is only one, small part.

Discover Your Characters by Using Them

Don’t write about your characters. Write through them.  Put them into a story as soon as you possibly can.

You may not understand why that character's hair-color matters until Act 2. You may not realize that your Hero is left-handed until the final battle.

By seeing your characters in action...

...you will fully understand them. There is no other way.

Now available as an ebook, paperback, or workbook.