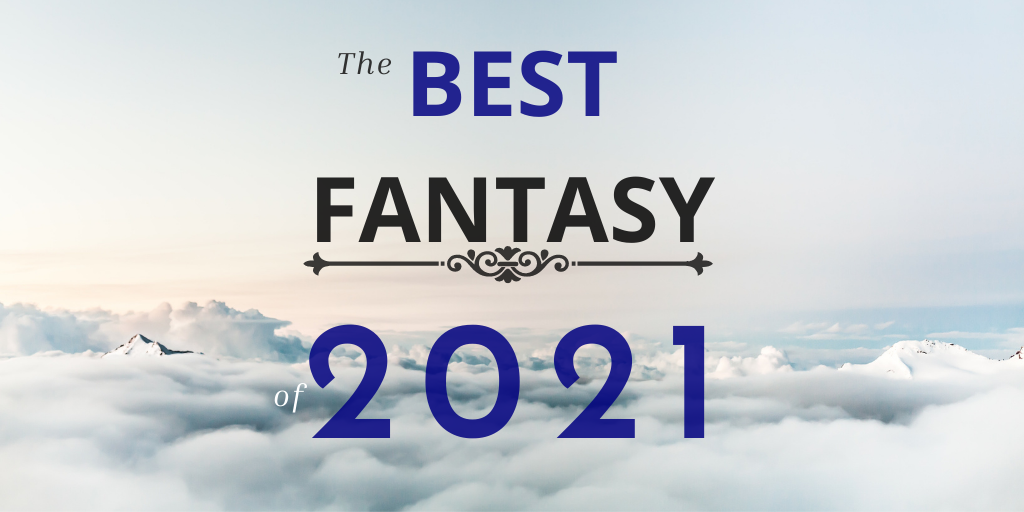 Looking for the best fantasy books of 2021?

I am in LOVE with this year's top picks:

1. The Shadow of the Gods

This book is awesome in every sense of the word.

An epic tale of war and woe, from one of fantasy's most talented authors. This is a new fantasy masterpiece, set in a norse-inspired world. The gods have (almost) gone extinct - but their magic is not gone.

Violent jarls fight for power, monsters lurk in forest and fjord, and a war is long overdue…

The story follow three main characters, each on a dangerous journey:

One day their paths will cross. And they will change the course of history.

2. She Who Became the Sun

Historical Fantasy set in medieval China, this is a legend you know all too well, retold and reimagined by a masterful writer.

Desire, that’s what she is. Zhu needs more from life. Unfortunately, Zhu was born a nobody in a nothing village on a dusty yellow plain.

That is, until a bandit raid destroys their home and Zhu’s brother gives up his destiny… and dies.

The world does not hand her this chance. No, she has to take it. This is the start of her path: bloody, dangerous, and full of enemies who hate her (some, just because of who she is).

But it’s not in her blood to give up. Zhu will do anything it takes to claim her own destiny, even if it means destroying others...

3. Under the Whispering Door

Funny, heartwarming, and desperate to find meaning in the time between life and the afterlife.

Wallace’s story begins after he dies. You see, he never really “lived his life,” and there were so many opportunities he let drift past.

But as he watches his own funeral - and a reaper comes to collect him - he realizes two things: yes, he is dead. And yes, he did waste his life.

However, there is one last stop before the afterlife. Wallace finds himself at a tea shop, owned by Hugo, who also happens to be the local ferryman of souls. And in this tea shop, Wallace is given an ultimatum:

He must cross over the river to the afterlife, in seven days.

Which means he has seven days to live a full lifetime.

A new trilogy inspired by the epics of India, full of forbidden magic, enemies and lovers, and a yearning for revenge.

The princess has been imprisoned - by her own brother - in the decaying, cliffside temple of Hirana. She burns for revenge, to wrest control of the throne that could have been hers, but she’s stuck here, in this old temple.

A temple with many secrets…

Priya, the servant, must obey her princess during her imprisonment. She cleans up after her, keeps her company, and tries not to stir the princess’s vicious temper.

But Priya possesses a forbidden magic, tied to this very temple. When the princess accidentally discovers Priya’s secret, the two realize they could be so much more, together…

They could start a fire that burns down the empire. And, maybe, inflame each other’s hearts.

Should You Read This?

Love and legend crash together to create this beautiful retelling of an ancient Norse tale:

Angrboda can see the future and all the gods envy her power.

When she refuses him, an enraged Odin burns this witch at the stake. Angrboda escapes, but leaves her fiery heart behind. Powerless, she wanders through a dark forest...

...until a god named Loki finds her, and returns her heart to Angrboda.

Thus begins a deep, abiding love between witch and god. Together, they create three beloved children.

But Odin does not forget. And he certainly doesn’t forgive. Angrboda the Oracle Witch must use every talent and resource at her disposal to change the will of the gods and save her

A twisting, intimate tale of growth and love, set in a gorgeous world inspired by both asian and western fairy tales alike.

The princess Shiori does not want to get married. Unfortunately, as the only daughter, this  decision is not up to her.

On the day of her betrothal, Shiori accidentally lets her magic escape - which is a bad look for the princess of a kingdom that forbids magic.

Fortunately, that means the wedding is off. Unfortunately, Shiori’s magical slip-up catches the attention of many insidious elements - including her stepmother (with magical secrets of her own), and a literal dragon.

Thus begins Shiori’s twisting, whimsical, and sometimes dark journey through the kingdom under a variety of curses and quests.

This book is filled with the enchanted remains of gods, beautiful villains, sweet romance, and a very compelling heroine - all set in a gorgeously-crafted world.

Your village has been sacked, everyone you know is dead, and you are as close to death as one can get.

An absurdly beautiful man finds you lying there, and saves you. He brings you back to life, though the price is ancient and bloody.

How much has he hidden from you? Keeping you trapped in a prison of his making, and surrounded by your own rival consorts. Your enemies.

But what if you didn’t have to hate the other consorts? What if you discover a truer, better love in their arms?

This is a darkly beautiful novella of the deathless bonds of love and fear, and a place somewhere between the two.

A relentlessly FUN, bitter, and hilarious romp through a High Fantasy world. Do NOT let this book slip past your attention.

Kinch decides to pay his debt by - what else - robbing someone blind. Unfortunately, today, he’s picked the wrong mark: Galva, a steadfast knight who also happens to be a handmaiden of the goddess of death.

The trick goes wrong. And a new danger enters at exactly the wrong moment. Now, Kinch and Galva find their paths permanently tangled.

Together, they must adventure through this magical, dangerous world, and act - often without honor - to save a missing Queen (and maybe even make a dent in Kinch’s exorbitant debts).

9. Empire of the Vampire

Don’t scroll away yet. This is so much more than “just another vampire story.”

This is a huge, grim adventure through a bloody, sexy, violent, nasty world.

The sun has gone out, and humanity is in shreds after losing the war. Gabriel de Leon, once a legendary vampire hunter, now rots in prison. Gone are the glory days - the days filled with hope that humanity might, maybe defeat the Empire of the Vampire.

Gabriel has nothing left, but his story. Bitter and wry and devilishly intriguing as it is. And the only one around to listen? His own monstrous captors.

Settle in, it’s a good story.

I know I’m late to this party. I only discovered Leigh Bardugo’s wonderful storytelling in 2020, and promptly devoured the seven books in the Grishaverse.

The Grishaverse is a YA Fantasy series set in an 1800’s Imperial-Russian-inspired world. Each book has a cast of captivating and intricately-connected characters, most of whom grow in surprising ways. Oh, and they fall in love a lot, which is often heartwarming and sometimes heart-wrenching.

The Grishaverse is ridiculously popular, and for good reason. The magic is more intense than 99% cocoa dark chocolate, and when the action gets going, it’s impossible to put these books down.

But most of all, it’s the characters who make these stories so damn good. They interweave with each other in such beautiful, simple ways that you can’t help but feel like part of the crew.

Despite the official reading order, I recommend starting with Six of Crows. It has no spoilers, and leads perfectly into the King of Scars duology.

Get Six of Crows Here (Recommended for Beginners).

You have no idea how the Elves live, until you read this.

This is a series about another culture. Specifically, the snooty, snobby, uptight, obsessed-with-rules kind of culture: the Elves.

This is also a series about their other halves, the Goblins.

But, most of all, this is a series about outsiders who must begin a new life in an unknown, treacherous world.

What do I love the most about this series? The ever-changing, extremely intricate interpersonal relationships. There are so many characters that flesh out this world, and each one is more suspicious than the last. You want to love some, and hate others. But you don’t know who to trust...

Combined with the world building and the fantastic dialogue, and this series will hook you in the first chapter, of either book.

I couldn’t stop raving about Goblin Emperor in 2014, and now I’m back in love with this world.

Scholomance is about a school for wizards. No, not that kind of school.

Well, almost. Take Hermione Granger from Harry Potter, and throw her in a horrifying magical hellscape of a highschool and watch her … thrive?

In Scholomance, death is a constant companion. It almost seems cruel to send the young sorcerers of the world here, but beneath this school’s dark secrets, lies a truth that only our young hero can uncover.

When you finish The Last Graduate, you will throw it across the room, because of where Book #2 ends. Let’s just say Book #3 can’t come soon enough.

Fantasy that gives a whole new meaning to the word “epic.”

This is the first in a NEW series that follows The Malazan Book of the Fallen. Finally.

The God is Not Willing takes place 10 years after The Crippled God (Book #10).

If you’ve read Malazan… this is a much humbler beginning. There are fewer main characters than the Malazan series, and the scope of this tale is just as rich, if more manageable.

If you haven’t… this is a series I only recommend to the most die-hard fantasy readers who are obsessed with epic worlds and grimdark magic. If that sounds like you, then you will love the challenge of Malazan.

Or Start The Malazan Book of the Fallen Here

In 2021, Fantasy is still one of the most popular genres. Forbidden magic? Godlike monsters? Romance that will crush your heart and leave it bleeding on the floor? Scroll up, and find the right book for yourself.

However, if you want more books, dear reader… have I got books for you.

Check out my other favorite books:

Those lists include highly acclaimed novels, super popular series, and a few of my personal favorites. Happy reading!